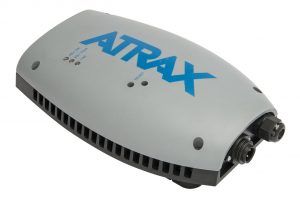 The Conveyor Control Node (CCN-8) allows for airport check-in conveyors to be completely assembled, wired and tested in the conveyor factory prior to shipping to site, resulting in a truly “plug & play” system solution.

Each check-in conveyor is fitted with an identical CCN-8 box, only the internal address set in the AS-i chip is different, hence this common and modular part approach simplifies system design and purchasing. The conveyor drum motor is wired directly to the CCN-8 and each CCN-8 has two Photo Cell (PE) inputs.

The AS-i connection to the CCN-8 is via the industry standard M12 connector. The CCN-8 draws power directly from the 3 phase 400VAC main input to provide power to the PE cells and optional indicator lamp. It does not draw this power from the AS-i bus so no additional AS-i power supply is required. The CCN-8 can be supplied with a single direction only or a reversing contactor. A motor overload protection device is fitted and the trip indicator and reset button are both accessible without needing to remove the cover.

The CCN-8 is housed in a rugged slim-line enclosure made from low smoke, flame retardant recyclable plastic. Typically it can be mounted to the end wall of the conveyor. The rear of the CCN-8 case has been made deeper to accommodate the motor contactors and this would protrude through a rectangular cut-out in the end wall, below the conveyor deck panel. This allows the CCN-8 to be housed behind the stainless steel end covers of a standard conveyor.

The AS-i Solution saves money by requiring less material, less labour and less time for a project, from the design and sales stage right through to the commissioning and handover stage. Even after project completion the CCN-8 solution continues to save through simpler maintenance and support.

* Simpler and cheaper logistics, fewer parts and cables to ship.

* Simpler and faster to design and document any check-in system configuration.

* Faster and simpler installation on site.

* A smaller and standardised Motor Control Centre (MCC) may be used for each check-in island or system group.

* Faster commissioning. All conveyors, including PE cells and motors are tested before they leave the factory. Better project control through more defined commissioning times.

* This modular concept also allows for simple system expansion or reconfiguration at any stage.

* Reduced Spares holding as every CCN-8 is either a reversing type or a single direction type and are all identical within these two types.

* ATRAX’S Quick Start handheld Interface/Programmer can be used by non-Software technicians to perform functional testing and commissioning of check-in conveyors at site prior to availability of PLC/High Level systems.